In 2020, Colgate Mattress® is celebrating our 65th anniversary as the most trusted crib mattress name for new moms. To commemorate this achievement and company milestone, we thought we would share some fun facts about how far babies have come since Colgate Mattress was founded in 1955, along with more facts about babies that you probably didn’t know! From Our Family To Yours Enter the “Flip My Crib” Contest 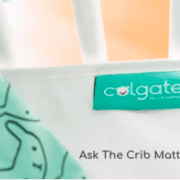 What Moms Really Need for Valentine’s Day
Scroll to top